Listen to The Colour Of Your Dreams 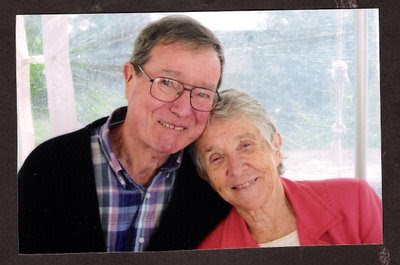 Joseph A. Dugan, my Dad, died last week. He was a great man and I am lucky to be his son. For over 30 years he taught mostly elementary school kids, about a thousand students in all. Here's what one of his students had to say about him.

I am so sorry for your loss- Mr. Dugan spoke often of his children and family back when I had him as my 6th-grade teacher at the Hosmer School in Watertown in 1979-1980.

Mr. Dugan was a wonderful teacher, a fine gentleman and a great source of belief and encouragement to the students in his room. Looking back on 13 years of public school in Watertown, 4 years of college, three years of law school and two years of graduate school, Mr. Dugan was the best teacher I ever had. His impact has held throughout the course of all those years since, and I am grateful to have had the good luck to have landed in his class that year- a break I consider one of the luckier ones of my life.

I have heard how teachers can open minds, hearts and spirits- I need look no further than Mr. Dugan for clear and certain confirmation.

May God Bless Mr. Dugan and may he rest in peace.

My sincere condolences to you all.
Rachel Kaprielian (Hosmer School , class of 1980)

When I was growing up, we always pronounced our last name with the accent on the last syllable, "du-GAN". Apparently the rest of the world, including the folks over in Ireland, pronounce it "DOOG-in". It's a mystery, but we think my Dad's folks may have changed the pronounciation back in the 1800s when they immigrated from Ireland because of the discrimination against the Irish. I guess "du -GAN" sounds more French than Irish.

It didn't happen often, but sometimes I met people in places far removed from Massachusetts who then asked me if my Dad was a teacher, just because of the way I pronounced "Dugan". They were students or parents of students of my dad, and they invariably had kind words and maybe a funny story. 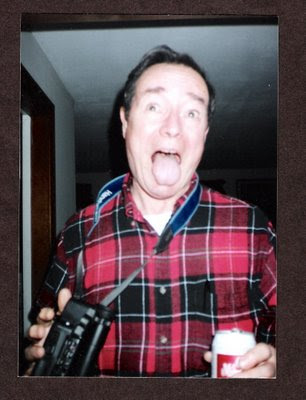 I called him Pops. Pops did alot of talking to his students in the course of his lessons, but he was a quiet man. Alot of the lessons we learned at home were from what he did, not what he said, like taking the extra job at the grocery store to put food on the table, or building the addition on the back of the house so my invalid grandmother, his mother-in-law, could come live with us.

Pops served as a Staff Sergeant in the U.S. Air Force during the Korean War.He didn't talk much about it, but he was in charge of setting up radio communication stations. He was a lifetime member of the National Education Association and served as a public school teacher and administrator in Weymouth, Hingham, and Watertown. 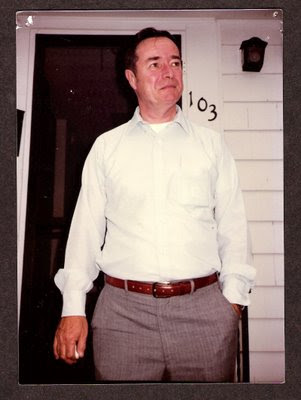 Nobody knew Robert's Rules Of Order better than Pops. While working as a teacher in Weymouth, Pops represented teachers in negotiating the first-ever union contract for town educators.He was an elected public official, serving as a Weymouth Town Meeting Member; member of the Weymouth Democratic Town Committee; and a member of the Weymouth School Committee for 2 terms, including several years as Chairman. He handed out the diplomas at my high school graduation!

The plastic looking sack of bones in the casket wasn't my dad, that was just the vehicle. Pops didn't die. The body he inhabited died, and we buried it in The National Cemetery in Bourne. And if I see you no more in this world, Pops, I'll meet you in the next one, and don't be late! 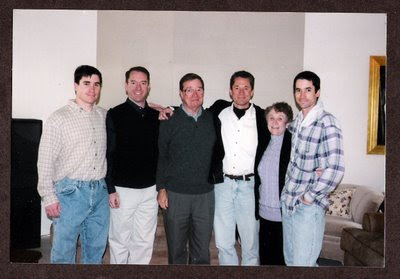 Mark "Fried Green Al-Qaedas" Hoback is on a roll. 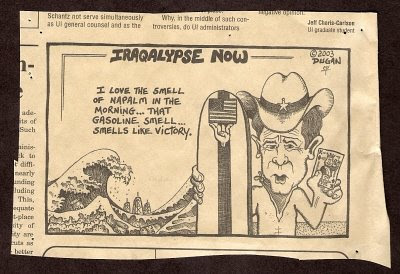 There's been much hand wringing in the cartoon world the past few weeks. Village Voice Media, publisher of many alternative weekly newspapers, has "temporarily" suspended publishing comics in all its papers due to shrinking budgets.

Max Cannon goes so far to suggest that the comics in the alt weeklies might disappear altogether, even from the internet, because, ya know, these website with comics aren't making any money!While I sympathize with the plight of cartoonists not making enough money, I find it hard to believe an artist is going to stop making art simply because there's not enough cash involved.

Matt Bors has an interview with Kevin Allman, editor of The Gambit, an alt-weekly out of New Orleans. 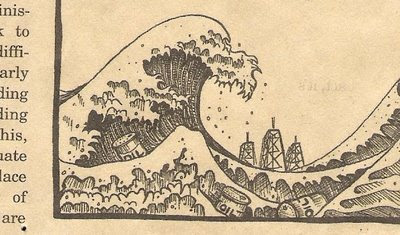 The newspaper industry overall, both the daily and weekly "alternative" press, is in a state of total panic right now. 2008 was the worst year I've ever had, with desperate editors cutting cartoons right and left. Dailies, for all the suicidal moves they have made, at least aren't axing cartoons. They run wretched ones, to be sure, but they recognize how vital comics are. I believe Weeklies should be ADDING features and content, especially cartoons, which are both popular and inexpensive. Instead the strategy seems to be "let's give our readers LESS to read!" Yeah. Wonder how that will work out?

What makes this even more of a blow, is VVM will apparently continue to run the ubiquitious sex-advice-astrologly features that appear in virtually every weekly. It's mostly the cartoons that are being tossed off the back of the bus. Me? I'll produce THE CITY for as long as I can. I'm determined to make it to the 20-year mark, just for my own sense of accomplishment. That will be May 2010. Beyond that, who knows. If it makes sense to continue, I will. If not, then I'll close it down and toddle off to do graphic novels. 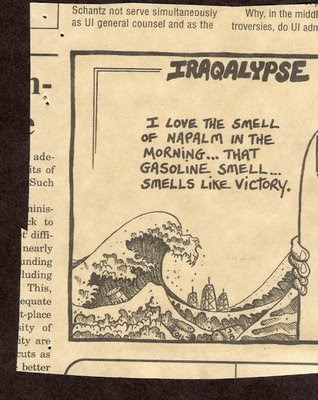 My own experience with the "industry" is on a much smaller, local scale. I started drawing editorial cartoons for The Daily Iowan in the Fall of 2002. They printed one or two a week, I wasn't paid alot, but it was something. I brought the same cartoons to The Iowa City Press-Citizen, and they started printing some, but they didn't pay. Not even a nominal fee. It was a "we're giving you exposure" gig that I did with an eye down the road, maybe somebody sees it and it gets picked up for syndication, I get rich and live happily ever after. With limited success, I did a little cartooning for Iowa City's "alt- monthly", The Little Village .( They changed publishers, I should drop them a line)

The Daily Iowan didn't like my cartoons on their pages also showing up on the pages of The Press-Citizen, so I was given an ultimatum. The Daily Iowan forced me to choose between the two papers, even though I was technically "freelancing". I went with the Daily Iowan because they were paying, but with the stipulation that I was a "staff cartoonist".

What I really wanted to do was a daily strip. The Daily Iowan is a college newspaper, and if you thought "what better venue for a local cartoonist to start a new comic strip than a college paper, especially when he's a staff cartoonist at the college paper!", you'd be dead fucking wrong. The paper ran Doonesbury, Non-Sequitor, Dilbert. I argued, quite logically, "why are you printing those comics when they also appear in The Press-Citizen? You don't want my cartoons appearing in both papers. Why don't you drop one of them and print my strip?"

I even did mock up pages and re-arranged all the content (horoscopes,crossword, etc.) so that nothing was dropped, but space was there for my strip. The editor in charge, on what I believe to be the advice of faculty advisors, refused to even consider the possibility. She wanted The Daily Iowan "Daily Break" page to look like every other lame ass daily newspaper in the country, so when she goes to get a job at one of them (good luck with that), she can show them copies of the Daily Iowan and say "See, my lame ass paper looks just like yours! Hire me!"

So I quit The Daily Iowan and started Zencomix. 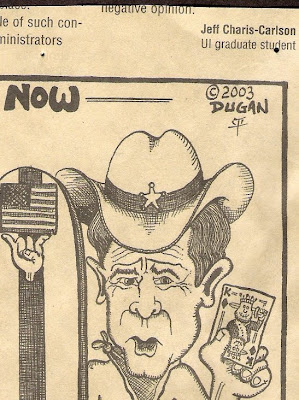 Virginia is for Lovers

Meanwhile, out at the farm...

Over at Blondesense,Calvin and Hobbes from 15 years ago.

Zencomix
Posted by zencomix at 11:10 AM 4 comments:

Zencomix
Posted by zencomix at 12:49 PM No comments:

Zencomix
Posted by zencomix at 5:58 PM No comments:

Question Mark and the Presbyterians

Zencomix
Posted by zencomix at 9:22 AM No comments:

The Future of Alt-Weekly Cartoons
If you follow the blogs of my colleagues in the alt-weekly cartooning world, you are probably aware of the panic that is taking hold due to the continued loss of paying clients. It feels like the industry is in free fall. (If you are not up to speed, see Tom Tomorrow, Max Cannon, Derf, and Jen Sorensen for starters.) 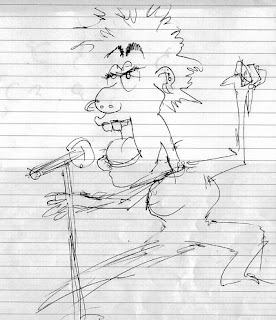 Zencomix
Posted by zencomix at 3:36 PM No comments:

Graffiti on the Walls of Empire

Opinions You Should Have 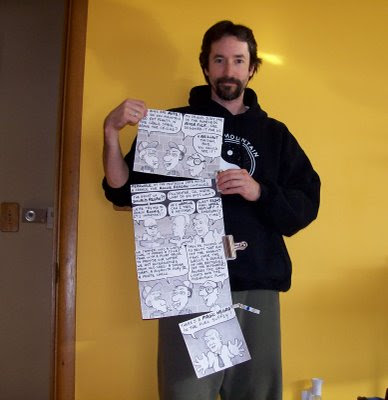 Here's a pic to give a perspective on how big the drawings really are.

Also, check out:
The Talking Dog