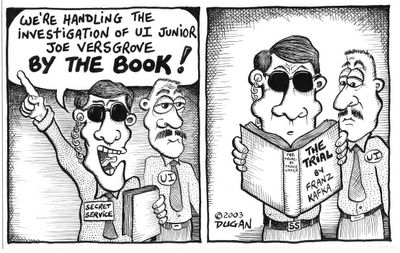 Joe Versgrove and The Secret Service......Back in 2003, a University of Iowa Student became the focus of an investigation by the Secret Service. He was never really told what the investigation was exactly about, but apparently something he wrote in an English paper led school authorities to allege that he was a "threat" to National Security or Bush. I googled "Joe Versgrove and The Secret Service" and all it turned up was a couple of articles from 2003 in The Daily Iowan about the case, and an abandoned blog by someone that knew Joe and thought he was an OK guy. Joe has flatly denied any wrongdoing, and attempts to get to the bottom of the investigation against him were fruitless at the time. Anybody know what happened to Joe?

i lived across the hall from joe when all this went down. i've hung out with him on multiple occasions, but none within the past couple years. all i know is he's not at uiowa anymore.

I'd sure like to read the paper that got him into trouble.

I was roommates with Joe's brother. The whole thing was a huge witch hunt. Joe is a great guy who was wrongly and unjustly accused through the laws of the patriot act.

yeah i hung out wit him last night...coolest guy ever,LOL!

I heard he hangs out with Kanye west now and helps him with his rhymes. Also, he knows a relative of Franz Kafka, she's hawt F0 ReAlZ