I did this cartoon 3 years or so ago. Has it been that long since Richard Pryor died? The folks at Crooks and Liars have a list of great comedians, and Pryor is #2. 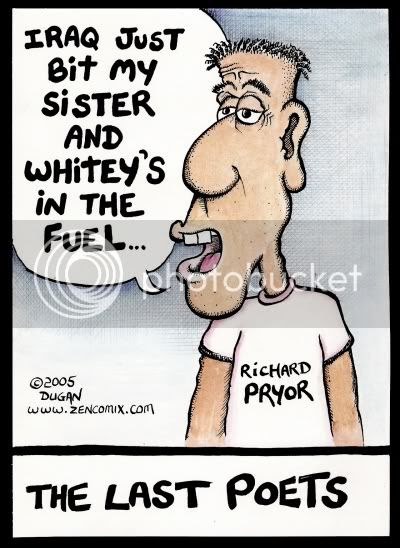 And for any Sensitivity Trolls out there, by "Whitey in The Fuel", I'm of course talking about Dick Cheney and his Energy Task Force, and not white people in general.


I can't seem to find the definitive answer to the question "Who wrote 'Whitey on the Moon', The Last Poets or Gil Scott Heron"?

There's been lots of talk about "race" in this presidential campaign. Here's a few more words on race for Black History Month...

Eldridge Cleaver
, author of the controversial 1960s book Soul On Ice, was at various times in his life a rapist, convict, Nation of Islam member,follower of Malcolm X, Minister of Information for the Black Panthers, the 1968 presidential candidate on the Peace and Freedom Party ticket, a fugitive living in Algeria and France, a born again Christian in Chuck Colson's church, a conservative Republican that endorsed Reagan for President, an unsuccessful Republican candidate trying to get the Republican nomination for one of the US Senate seats in California, a talk radio show host, a crackhead, and a baptized Mormon of the Church of Jesus Christ of Later Day Saints.That's some fuckin' resume!

Despite some of the crazy racist, sexist, and homophobic crap in Soul on Ice, there are some valid observations in the book concerning the history of racism in America. Read it with a grain of salt.

Zencomix
Posted by zencomix at 8:45 AM