I just returned last weekend after a month in The Philippines, and I'm still shaking the cobwebs from my brain. The purpose of the trip was to visit family and help celebrate Lola Lota's 8oth birthday. A good time was had by all! The vacation was also a blessed relief from "American Junk". Scrutinizing the minutiae of primary season, day after day, can wear you down.

Did I miss Bill O'Reilly's "War on Saint Valentines Day"? Did John McCain's mistress give birth to Rudy Giuliani's adopted black child, the great great grandson of Strom Thumond and his maid? Is Rush Limbaugh getting his painkillers direct from the poppy fields of Afghanistan? Has the corpse of Vincent Foster been re-animated by Karl Rove in Dick Cheney's secret underground puppy blood factory?

When you're stopped on the Marcos Highway at 2:00 AM by a military roadblock because Philippines President Gloria Arroyo is under threat of yet another impeachment attempt, and the tanks are rolling into Manila in anticipation of People Power resisting the powers that be trying to confine them to a George W Bush style "Free Speech Zone", things like "flagpins, and who ain't wearing 'em" are a million miles away. 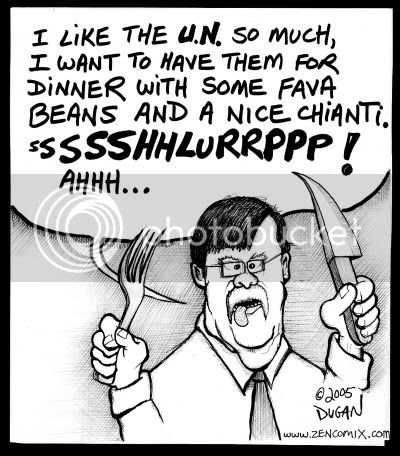 Zencomix
Posted by zencomix at 12:07 PM

You didn't much much, except some extreme nastiness and business as usual.

you have no talent as an artist, and you're not funny, i don't know how you could fail more as a cartoonist.

Many thanks for name checking and adding me to your blogroll.

Ignore anonymous comments, They are usually timewasters, with zero talent.