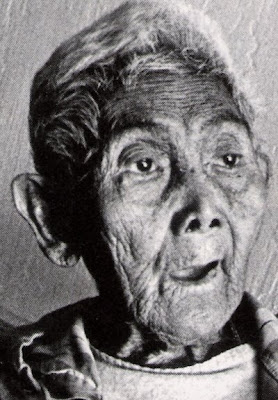 "I, Magdaleno Sanchez Duenas, do solemnly swear...that I will bear true faith and allegiance...to the United States of America...that I will serve them honestly and faithfully...against all their enemies whomsoever...and I will obey the orders...of the President of the United States...And the orders of the officers appointed over me...according to the rules and Articles of War."


On July 26, 1941, President Roosevelt issued an Executive Order calling members of the Philippine Commonwealth Army into the service of the United States Armed Forces of the Far East. Under this order, Filipinos were entitled to full veterans' benefits

In 1941, Duenas answered the call of President Roosevelt for Filipinos to take up arms and join the fight against the Japanese. In 1943, he joined guerilla forces in the mountains and was captured by the Japanese while procuring food for American Soldiers. He never gave away any information regarding his fellow guerillas. He managed to escape and later helped free 10 American soldiers from the Japanese POW camp.

In October of 1945, Gen. Omar Bradley, then Administrator of the Veterans Administration, reaffirmed that the Filipino Veterans were to be treated like any other American veterans. But on February 18, 1946, the Congress passed and President Truman signed Public Law 70-301, known as the Rescission Act of 1946. It said that the service of Filipinos "shall not be deemed to be or to have been service in the military or national forces of the United States or any component thereof or any law of the United States conferring rights, privileges or benefits."


Duenas is one of thousands of Filipino World War II veterans who were betrayed by the United States. Congress rescinded Roosevelts promise of citizenship and full GI benefits to the Filipino Veterans. In fact, Filipino Veterans were the ONLY national group singled out for denial of full US Veterans status, while more than 66 other groups received full benefits.

Initially, there were 250,000 Filipinos Veterans. Today there are about 18,000, and they die at the rate of about 10 a day. Various bills have been introduced over the years to rectify the injustice of The Rescission Act of 1946, but they have never been passed. The latest bills: Last April, the Senate voted 96-1 on S.1315, an omnibus veterans bill that included a $300 a month benefit to Filipinos WWII veterans living in the Philippines and $900 a month to those living in the US. In September, The House overwhelmingly approved on a voice vote the same Senate measure, but with the benefits for Filipino veterans stripped out. Thanks alot, you Blue Dog Bastards and your Republican buddies!

The next day, the house passed H.R. 6897, sponsored by Bob Filner (D-CA) and Darrel Issa (R-CA), providing for a one time lump sum payment of $15,000 to the Filipino Veterans who are US citizens and $9000 to those living in the Philippines. The resolution authorized an appropriation of $198 million as a compensation fund.

Because of the different measures approved by the House and Senate, a conference was needed to reconcile the bills. Senator Akaka of Hawaii, chairman of the Senate veterans affairs committee and sponsor of S.1315 called for one, but Senator Dick Burr (R-NC) is blocking the motion.
Veterans groups prefer S.1315 to the House lump sum measure because it amends the Rescission Act and restores full recognition to the Filipinos as American Veterans as well as compensation. The lump sum measure requires a 'quit claim' amendment that releases the US from all obligations, including the exclusion of veterans widow from compensation, and a break in eligibilty for medicare and disability benefits.

91 year old veteran Celestino Almeda of Washington D.C told news reporters that "accepting payment without being recognized by the US Government as a valiant soldier who fought alongside American troops during World War II would make me a mercenary. I cannot sell my soul." 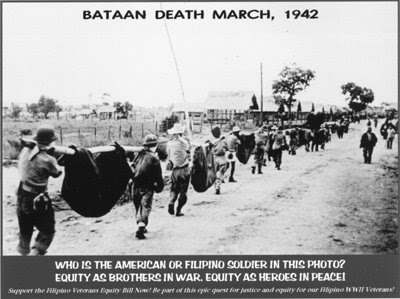 Information for this post was gathered from TESTIMONY OF SENATOR INOUYE BEFORE THE SENATE COMMITTEE ON VETERANS AFFAIRS ON S. 623, THE FILIPINO VETERANS EQUITY ACT, PBS The American Experience, The Veterans Equity Center in San Francisco, and Jon Melegrito for Filipinas Magazine
Posted by zencomix at 8:49 AM