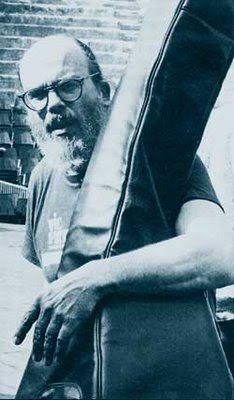 On Thanksgiving My friends Ken, Deb, Martin, and Misuzu came by for some pie. Ken and Martin are cellists, and Misuzu plays piano, so naturally we got talking about music. Martin is starting up a metal band with 3 cellos and a drummer, and he got talking about Dream Theater (Steve Vai did some recording with them, but only a vocal track, go figure!)I told them about the upcoming Zappadan celebration. Ken used to play in a symphony in Texas and suggested I investigate Buell Neidlinger. I couldn't find any video as he did mostly studio work, but Buell recorded with Zappa and Jean Luc Ponty.

Here's a small part of a great interview withBuell Neidlinger

All About Jazz: I wanted to first start with how you made the switch from ‘cello to bass and how you began your jazz career.

Buell Neidlinger: Oh, when I was young I was one of those – what do you call those people – prodigies? I was a cellist, and my cello teacher Luigi Silva’s idea was that in the summer you should take bass lessons for a month, because it would strengthen your hand for the cello, which is very true. Not only that, it makes the fingerboard of the cello seem that much smaller, and so the technical demands seemed much less than they had previously. Anyway, he hadn’t chosen a bass teacher for me, but he told my parents they should find one. My uncle was more interested in music than my parents were, and they put him to work to find a bass teacher. So, he picked me up one evening and took me down to Eddie Condon’s nightclub in the Village (it was on Third Street then) and he pointed to Walter Page, the great bassist in the Basie orchestra who was also with Eddie Condon for many years, and he said ‘there’s your bass teacher.’ And so I commenced having lessons with Walter Page. He had some ability with the bow – I had a lot more than he did – and he did show me the bass and how to play it, and I got interested in him as a person and I started to hang around Condon’s a few times (of course you had to go with an older person). I was thirteen or something – I was pretty young.

And that’s how I got started on bass.

AAJ: You had taught some too, at Cal Arts and the New England Conservatory?
BN: That came years later, after I was in the Boston Symphony. While I was with the BSO, I went out [to California] to record with Frank Zappa on October 19, 1969. That’s a date I’ll never forget because it was a turning point in my life. That day I met Mel Powell, who was the dean of music at the new school and had been interested in hiring me. After our meeting in Frank’s basement he hired me and I went to Cal Arts.

A short list of people Buell has played and recorded with: