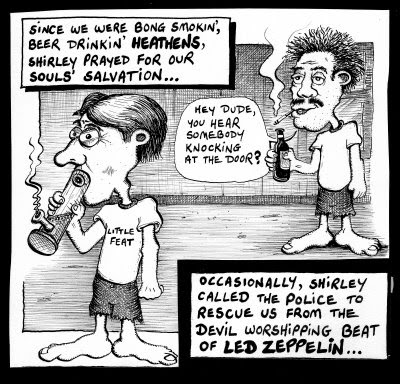 Although Zappa was rabidly anti drug, he did find time to do some interviews with High Times Magazine. Here are some excerpts:

Zappa: Yes. We also had a request to go to South Africa and play at an outdoor festival. I said that if they would make it a mixed event with blacks and whites together, I'd consider it, but they wouldn't do it so we didn't go. We even had an offer to play for the pope.

Zappa: You don't believe me. Pope Paul VI. This is an offer that came into our office. The pope wanted to attract the youth of the world to a speech he wanted to make, and they were going to get all these rock groups to play. Popestock.

Zappa: Well, not necessarily. You heard about his sex manual, didn't you?

Zappa: Well, let's get down to some details. I recall a meeting in the dressing room of the Garrick Theater wherein you explained in minute detail certain experiences that took place in the ladies' rest room after hearing a performance by Ritchie Havens –

Zappa: Coming into the drum?

HT: Why do you think they're not playing your records?

FZ: Well, I don't think it matters as long as there is such a thing as a somebody. We know that there is a somebody, and if he were elected, maybe we could do something about this somebody. But the problem is that the government of the United States is not exactly what really governs the United States. And this is true in other countries, too.

I think that the life of the people is in the hands of those who own raw materials and those who own manufacturing. They make deals with elected representatives to carry out merchandising programs on their behalf. It's almost like the politicians are a form of entertainment that allows people to get into pseudo-debates over pseudo-issues, while behind the scenes you have guys with billions and trillions of dollars moving weapons around, moving sugar around, moving cotton, soy beans, machinery, electronics, all this stuff. The world is a business. And the sooner we start looking at the world as a business, the easier it's going to be for us to live in the world.

I enjoyed following the whole entry, I always thought one of the main things to count when you write a blog is learning how to complement the ideas with images, that's exploiting at the maximum the possibilities of a ciber-space! Good work on this entry!