Some people are purists and don't do Zappadan posts until the "official" start. I am not a purist! Zappadan doesn't start "officially" until the 4th. That makes Zappadan Eve on the 3rd, and it is now December 3rd in the Philippines! Think of it as Zappadan Foreplay...

Last year, I kicked off with a Peanuts gag. This year I pay tribute to Zippy The Pinhead and Zappa with a mash-up of a Zippyism, and the Mothers album Uncle Meat.

Back in the early 1990s, Bill Griffith had a "draw your own Zippy head" contest in his daily strip, and I was one of the winners.

The strip now appears in the Zippy book "From A to Zippy", and, also, too, my version of Zippy was one of 36 that was used on the inside front cover of the Zippy book "Pinheads Progress". 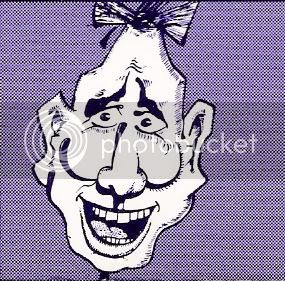 Hey, very cool and glad you made it into the books.

Do you remember or ever see the Odd Bodkins toon....it ran in the SF papers and I enjoyed his style and outlook.

I'm only marginally familiar with Odd Bodkins as it pertains to the Air Pirates/Disney lawsuit. I'll have to look into it more.