A Cow , A Chickenhawk, Sarah Palin, and a Rabbi Walk into a Bar Mitzvah... 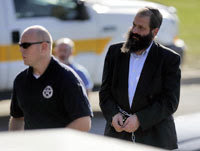 Today, Israel opened up a new front in its ongoing war by laying seige to the city of Postville, Iowa, home of Agriprocessors, the largest kosher meat packing plant in the United States.

On 12 May 2008, U.S. Immigration and Customs Enforcement (ICE) staged a raid that was described as the largest of the year. Federal authorities arrested hundreds of illegal immigrant workers during the raid.

As of October 2008, Agriprocessors owners and managers were charged with 9,311 misdemeanor charges for illegally hiring minors and allowing them to operate dangerous equipment.Israel denies that having a 9 year old child operate a high speed bone saw is dangerous.

In late 2004, People for the Ethical Treatment of Animals released an unusually gory video filmed undercover at Agriprocessors, showing cattle having their tracheas and esophagi being ripped out of their necks and surviving for minutes after shechita.

Noted animal welfare expert and meat scientist Temple Grandin called Agriprocessors procedures an "atrocious abomination" and worse than anything she had ever seen in over 30 kosher abattoirs.Israel denies the charges of atrocities. Rabbi Yaakov Wasserman, in an interview with an unlicensed plumber from Ohio, defended the ritualized slaughter.

An internal report from the USDA not only held that Agriprocessors engaged in acts of inhumane slaughter, but that USDA inspectors were sleeping on the job, playing computer games, and had accepted bribes of free meat to ignore violations at the plant.Israel denies having any kind of influence over the implementation of US policy.

In September 2005, workers at Agriprocessors’ distribution site in Brooklyn, New York, voted to join the United Food and Commercial Workers union. The company challenged the vote, claiming that the majority of workers who voted were in the US illegally, making their votes invalid despite protection granted undocumented workers in the National Labor Relations Act.

The Rubashkin family was reported in the Cedar Rapids Gazette on June 5, 2008, to have denied any criminal activity; Aaron Rubashkin said that he did not know "workers were illegal and that they had produced what appeared to be legitimate work documents". Yet, in an earlier labor relation case, the firm had made use of the argument that it knew that some of the employees at another of its facilities, in Brooklyn, NY, were illegal immigrants.

According to the U.S. attorney's office for the Northern District of Iowa, those arrested "include 290 Guatemalans, 93 Mexicans, 2 Israelis and 4 Ukrainians".Israel denies that the 2 Israelis had immigrated illegally, and contends that they were "settlers".

Israel has vowed to crush all oppositon to the meat plant, and allow the 2 Israelis to resettle Postville.
Posted by zencomix at 9:10 AM