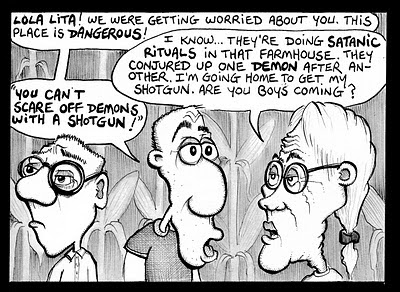 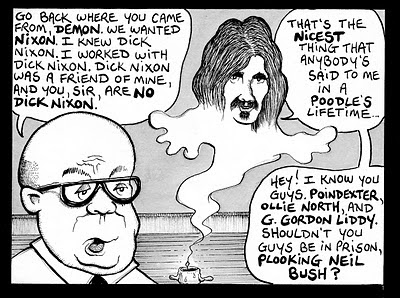 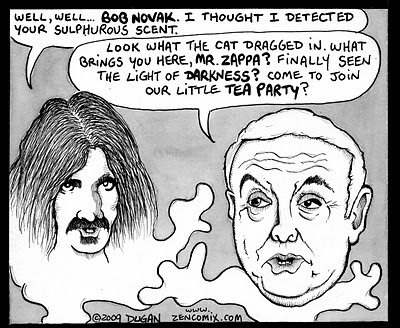 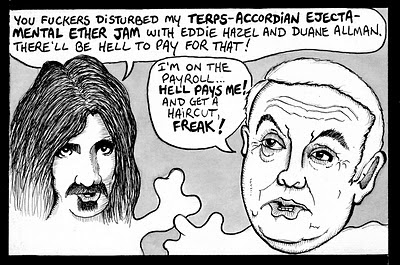 Back in the 1980s in Upstate New York, one of the UHF TV stations (23?) had a weekly "Bad Cinema" night.I believe it was literally called "Bad Cinema". They played the cheesiest old SciFi, horror, etc. One night they had a movie, can't remember the name of it, the plot being an island was haunted, and the townsfolk were heading out to get rid of the demons. An old farmer dude, or maybe he was a fisherman, says "You can't scare off demons with a shotgun!"

Zencomix
Posted by zencomix at 12:14 PM

It must be true, 'cause everyone says ya need a priest fer that ; )

It must be true, I read it in Rolling Stone!

hi zencomix
I am from greece. We love your scetches.
We ask your permission to post one on our blog with reference back to you

Thanks for asking hidejekyl. You have my permission to post one.

Hi zencomix! I am Count Douchebaggio from Douchebaggylvania!!!! I vant to zuck your blooD!!!

Comrade,One of my old Douchebag of Liberty cartoons has Novak with fangs!

hi zencomix!
have you seen your sceth on our blog...

Yes, thank you for the linkage

Man, I discovered what a great blog this is. Now I have to come here all the time!
Thanks for making this Zappadan one of the greasiest ever!

Thanks a lot, Microdot!