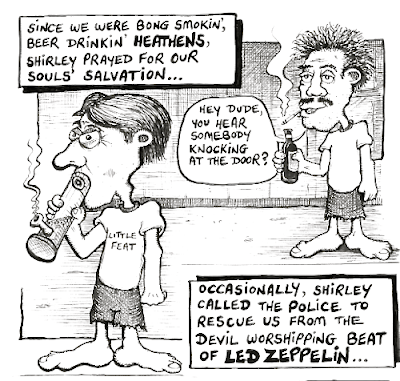 So, let's get this straight. With the Supreme Court decision in Citizen's United, the Activist Judges of Conservative Persuasion want to allow corporations "Free Speech" rights when it comes election time. Corporations are "people" and money is "speech", or so they would have you believe, and Freedom of Speech is sacred, so let the spending begin!

But when it comes time for an individual, a high school student, to express religious beliefs during a field trip, the Same Activist Judges of Conservative Persuasion want to outlaw the students rights to Freedom of Speech!

Morse v. Frederick, 551 U.S. 393 (2007) was a school speech case in which the United States Supreme Court held that theFirst Amendment does not prevent educators from suppressing student speech, at a school-supervised event, that is reasonably viewed as promoting illegal drug use...Majority opinion. Chief Justice Roberts, writing for the majority, concluded that the school officials did not violate the First Amendment. To do so, he made three legal determinations: first, that "school speech" doctrine should apply because Frederick's speech occurred "at a school event"; second, that the speech was "reasonably viewed as promoting illegal drug use"; and third, that a principal may legally restrict that speech—based on the three existing First Amendment school speech precedents, other Constitutional jurisprudence relating to schools, and a school's "important—indeed, perhaps compelling interest" in deterring drug use by students.

Apparently, all speech is equal except some speech is more equal than others.

"Commercial Free Speech" is a funny concept! How much money does Free Speech cost? There's your Zen Koan for the month. Speech sent over the public airwaves is regulated and censored everyday. Hello George Carlin! Some people find pornography obscene, and"Obscenity Laws" exist to restrict pornographers' Free Speech Rights. Let's just declare Corporations Spending Money On Political TV Commercials and Other Election Related Activities to be obscene, and prevent them from "Speaking" the same way you prevent Hustler Magazine from "Speaking" during the ABC After School Special time slot.

As George Clinton says, "you can't afford free speech, so you might as well pay attention".

I'll gladly pay you Tuesday for a campaign ad today.

A peach or a pear or a coconut, please!

Clearly, free speech costs more than some local high school druggie/dope dealer can afford; until he graduates into much bigger and more lucrative markets— crank, heroin, etc., and can join the Corporatocracy.

In the meantime, it would be fun to substitute "God" for "illegal drug use," and see how long it takes them to redefine their hypocrisy.

the repubs sure know how to fuck this country up......

Who are those handsome young men?