So, I'm watching a black and white film on the community college cable station, a dubbed pic about oil field workers in Mexico trying to drive a couple of trucks of Nitro to an oil field fire, in an effort to blow up the source of the fire. Good flic. The film is followed up by Beat The Devil, starring Humphrey Bogart, written by Truman Capote and someone else, I only had one eye on the screen, I only remember the one . You could say I'm Live Blogging Beat the Devil, except I haven't been paying the slightest bit of attention. Attention must be paid elsewhere. ( and just as I'm highlighting the word "elsewhere", a character on Beat The Devil says the word "elsewhere", just before "The Diamond Boys , The Gold Boys..."....look it up! 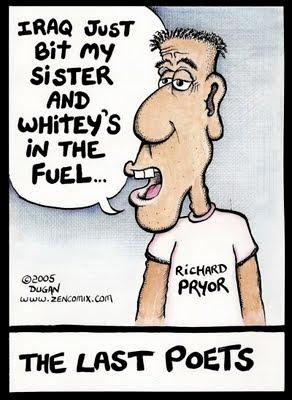 Thanks for posting on Gil Scott-Heron. I did too, but since he had most of his fame in the '70s and early '80s, I hope he hasn't fallen off the public radar. He was for real. He was part of that "underground" archetype that spanned from the "Beats" of the '50s onward.

He had some great stuff. R.I.P.