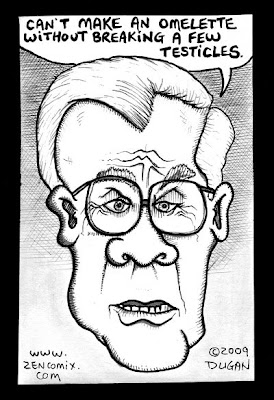 Today's Democracy Now show has a story and interview with Donald Vance, an American veteran and contract worker in Iraq. He and Nathan Ertel were detained and tortured by the American military for 3 months after it became known that they were working with the FBI to uncover illegal activities by their employer, Shield Group Security, during the war. They are suing Rumsfeld, and a Federal Appeals Court has granted the right for the trial to proceed.

In rejecting the request to dismiss the case, the court ruled on Monday the plaintiffs had sufficiently alleged that Mr Rumsfeld had played a personal role in authorising the harsh treatment to which they had been subjected while in US custody.

The dominoes have to start falling sooner or later for these guys - as history shows, not always the case while they're around to pay ; (

I'm not hopeful he'll ever see the inside of a courtroom. A higher court will dismiss, or the whole thing will be tied up for years and then he'll die of old age. One of the reasons why it won't happen; The Torture Never Stopped when Obama took the reins.

But it's good to see at least one court make them jump through some hoops.