It's Cold Out, Buddy. Get Down Off The Cross, We Need The Wood 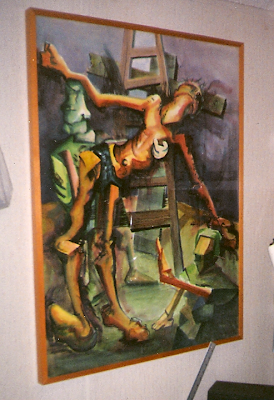 Nevertheless, I was disappointed to read last Thursday that a Mason-Dixon poll found that 26% of all American voters would be “uncomfortable” with a Mormon as President. Last month, a Public Religion Research Institute poll put that figure at more than 40%. In June, a Quinnipiac poll put the figure at 36%. And a Gallup Poll in June found that 22% of all voters would not support any Presidential candidate who is an active Mormon.

The Constitution could not possibly be clearer on this point. The penultimate sentence of the Constitution states: “no religious Test shall ever be required as a Qualification to any Office or public Trust under the United States.” Note that this was in the original Constitution; the First Amendment and the Bill of Rights came later.......

Perhaps this is one of those times when people need to be reminded of what Lincoln called “the better angels of our nature.” Bigotry is wrong, whether it’s directed against African-Americans, gays, Jews or Mormons.

The polls Grayson quotes don't appear to have much detail (he didn't provide any links, and I'm not bothering to go look for it), so it is impossible to say from reading his post what it is about Mormonism that people find objectionable. Perhaps it is the Church's views on abortion? If voters don't want to vote for people with particular religious beliefs, I wouldn't call that bigotry. What if Romney belonged to Fred Phelps' Westboro Baptist Church, is it bigotry to say you are not going to vote for him based on his membership in that church?
Posted by zencomix at 7:22 AM

Bigotry is wrong, whether it’s directed against African-Americans, gays, Jews or Mormons.

Often, it's been directed by the Mormon Church against the African-Americans, gays, and Jews.

I'll always be bigoted against entitled douchebags who got rich by killing jobs, no matter which sky fairy they allege allegiance to.
~

Yeah, the Mormon Church was very active in helping to pass Prop 8 in California, preventing same sex couples from marrying. That might have something to do with people being "uncomfotable" voting for a Mormon.