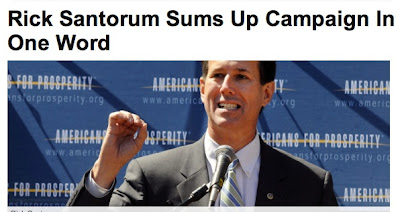 "My record isn't Swiss Cheese. I mean it's solid, it's a solid block of cheese." Rick Santorum (h/t to Tengrain)

Ladies and gentleman, Zappanistas and Zappaneers, I submit to you the liner notes to the Zappa album "You Are What You Is"


"THIS ARTICLE WAS ORIGINALLY PREPARED for publication in Newsweek magazine. After it was sent to them, they rejected it saying that it was too 'idiosyncratic.' Since we needed something to fill up this space, this article will now meet its destiny as decorative filler material.

Say Cheese …
It has been suggested that the Gross National Product is perhaps not the best indicator of how well we are doing as a society since it tells us nothing about the Quality of our Lives … but, is this worth dwelling upon as we grovel our way along in the general direction of the 21st Century? When future historians write about us, they base their conclusions on whatever material goods survive from Present-Day America, we will undoubtedly stand alone among nations and be known forevermore as 'THOSE WHO CHOSE CHEESE.'

As you will recall, folks, nobody ever had as much going for them in the beginning as we did. Let's face it … we were fantastic. Today, unfortunately, we are merely WEIRD. This is a shocking thing to say, since no Red-Blooded American likes to think of his or herself as being WEIRD, but when there are other options and a whole nation CHOOSES CHEESE, that is WEIRD.
Our mental health has been in a semi-wretched condition for quite some time now. One of the reasons for this distress, aside from CHOOSING CHEESE as a way of life, is the fact that we have (against some incredibly stiff competition) emerged victorious as the biggest bunch of liars on the face of the planet. No society has managed to invest more time and energy in the perpetuation of the fiction that it is moral, sane and wholesome than our current crop of Modern Americans.

This same delusion is the Mysterious Force behind our national desire to avoid behaving in any way that might be construed as INTELLIGENT. Modern Americans behave as if intelligence were some sort of hideous deformity. To cosmeticize it, many otherwise normal citizens attempt a peculiar type of self-inflicted homemade mental nose-job (designed to lower the recipient's socio-intellectual profile to the point where the ability to communicate on the most mongolian level provides the necessary certification to become ONE OF THE GUYS). Let's face it … nobody wants to hang out with somebody who is smarter than they are. This is no FUN.

Americans have always valued the idea of FUN. We have a National Craving for FUN. We don't get very much of it anymore, so we do two things: first, we rummage around for anything that might be FUN, then (since it really wasn't FUN stuff in the first place) we pretend to enjoy it (whatever it was). The net result: STRESSED CHEESE.
But where does all this CHEESE really come from? It wouldn't be fair to blame it all on TV, although some credit must be given to whoever it is at each of the networks that GIVES US WHAT WE WANT. (You don't ask – you don't get). Folks, we now have GOT IT … lots of it … and, in our Infinite American Wisdom, we have constructed elaborate systems to insure that future generations will have an even more abundant supply of that fragrant substance upon which we presently thrive.
If we can't blame it on the TV, then where does it come from? Obviously, we are weird if we have to ask such a question. Surely we must realize by now (except for the fact that we lie to ourselves so much that we get confused sometimes) that as Contemporary Americans we have an almost magical ability to turn anything we touch into a festering mound of self-destructing poot.

How can we do this with such incredible precision? Well, one good way is to form a Committee. Committees composed of all kinds of desperate American Types have been known to convert the combined unfulfilled emotional needs and repressed biological urges of their memberships into complex masses of cheese-like organisms at the rap of a gavel. Committee Cheese is usually sliced very thin, then bound into volumes for eventual dispersal in courts of law, legislative chambers, and public facilities where you are invited to eat all you want.

If that doesn't fill you up, there is the exciting Union Cheese … the most readily available cheese-type offered. The thing that's so exciting about Union Cheese, from a gourmet's point of view, is the classic simplicity of the mathematical formula from which it is derived. In fact, it is difficult to avoid a state of Total Ecstasy if one contemplates the proposition that no import quota yet devised has proven equal to the task of neutralizing the lethal emissions generated by the ripening process of this piquant native confection. Should we not be overtaken by some unspeakable emotion when we consider the fact that the smaller the amount of care taken in the preparation of each Union Cheese Artifact, the more triumphant the blast as the vapors stream forth from every nook and cranny of whatever it was that the stalwart craftsperson got paid $19.00 per hour to slap together?


Still hungry? Union Cheese might be the most readily available, but no type of cheese in America today has achieved the popular acceptance of Accountant Cheese. If it is true that YOU ARE WHAT YOU EAT, then surely our national willingness to eat this stuff tells us more about ourselves than we probably wish to know. Obviously we have found The Cheese To Believe In. Why not? It is manufactured by people who count money, endorsed as nutritionally sound by Civic Leaders, and delivered by The Media door to door. The Quality Of Our Lives (if we think of this matter in terms of 'How much of what we individually consider to be Beautiful are we able to experience every day?') seems an irrelevant matter, now that all decisions regarding the creation and distribution of Works of Art must first pass under the limbo bar (a/k/a 'The Bottom Line'), along with things like Taste and The Public Interest, all tied like a tin can to the wagging tale of the sacred Prime Rate Poodle. The aforementioned festering poot is coming your way at a theatre or drive-in near you. It wakes you up every morning as it droozles out of your digital clock radio. An ARTS COUNCIL somewhere is getting a special batch ready with little tuxedos on it so you can think it's precious.
Yes Virginia … there is a FREE LUNCH. We are eating it now. Can I get you a napkin?"
— FZ, April 1, 1981

Cheesy Ricky is very cheesy. Or cheese-like substance, that is so true.
~