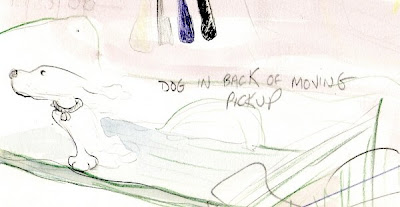 My old buddy Brendan died about 10 years ago. I don't remember exactly when it was, but it was shortly after the Worldcom scandal. Remember Worldcom? Brendan worked for them briefly before the whole shit hit the fan. He died shortly after leaving Worldcom, suffering an epileptic seizure.

Brendan was a banjo picker, but he played stuff like "Shine On You Crazy Diamond" instead of "Foggy Mountain Breakdown". He drove an old Chevy pick-up (1963?) and painted it with green house paint. Up above is a quick sketch of Freddie's dog Shea in the back of Brendan's truck. I remember one time Freddie and I were visiting Brendan up on Mt. Riga, and he blew out a brake line. His folks were always teasing him about getting rid of the truck anytime something broke, and buying something new, but he just yanked out the worn out part, and put in the new part. If I remember correctly, he had the power steering from a Mercury Montego installed on the truck.

Brendan had quit college after a couple of years, and went to Jamaica to work as a Maintenance Expert at a resort in Runaway Bay. Brendan could fix anything, it's no wonder why he loved his Chevy. I don't remember how long he did that, 2 years? 1 year? He eventually came back and went back to college, graduated. He spent some time working at a hardware store, fixing lawnmowers and other assorted small engines, before the ill fated Worldcom gig.

Mt Riga was quite a time. Massive meteor showers in August of 1991. There was a French family that had driven up the mountain and were camped out in their car down by the dam. Brendan invited them back to the farmhouse. They were visiting family in Montreal, and drove down to Mt Riga because they had read somewhere that Mt Riga would be the best place to view the meteor showers. We set them up with cots and blankets, busted out the wine and beer. The dad was a bit of a George H. W. Bush fan, and after a bit of spirited discussion, he said in his Parisian English "Nothing divides people like politics and religion", and we wisely went back to watching the meteor showers. In the morning, Brendan had phone numbers and addresses for places to stay in Montreal and France, if he ever got out that way.

He sounds like a great guy.Thanks for sharing your friendship.

Mt Riga was magic, almost as much as Brendan. I miss Brendan and think of him often. I remember sitting on the couch in January freezing. The place was heated by a wood stove. But the library there was amazing. I remember reading Mark Twain ... the first edition.

Hey Jones, I never made it up there in winter. Brendan laughed that soft chuckle the first time he saw my Datsun 210 with the white house paint paint job.

There was a nice music collection up there as well. The Bob Marley interview tape, the Bonnie Raitt live bootleg, recorded in Cambridge when she was something like 20 years old...