Rush Limbaugh wants to blame "Feminazis" for the root cause of the supposed decline in the size of men's dicks.

"Give 'em time, and they'll blame bush." Limbaugh stated. Which is funny because bush is usually responsible for enlarging men's dicks, not shrinking them. But, it's OK Rush, there's certainly nothing wrong with bush shrinking a man's dick. 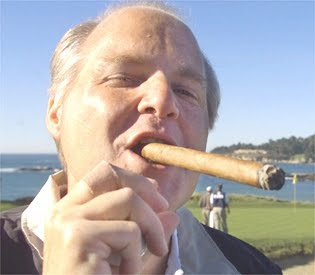 Bush isn't for everybody, and that's OK. I can see why Rush might want to generalize, though. He doesn't want to feel alone. If bush shrinks his dick, he wants to feel like he belongs, so he imagines bush shrinks every guys dick.

And sometimes a cigar isn't just a cigar.
Posted by zencomix at 12:20 PM

Sometimes a dropout, pill-popping, sex tourist is just a Limbaugh.
~