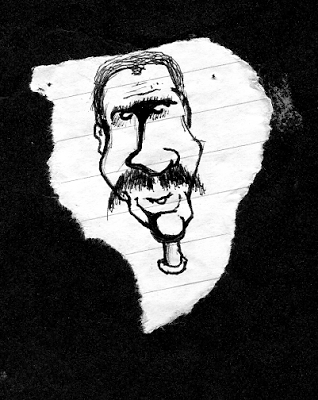 z, it likely looks more than a little like you , of what i was starting to say something of back with my first comments , of the many ways that we draw ourselves in our draw.. . g, and how much the literal, physical shap' of our hand flows in that many . so you are zappa with finer/less hair

it's more than that , of what i'm meaning , / another sampling of a.. many ways ..is .. when i let justin ( mccarthy /wade, you may have noted him over on ioz through ) come up to visit with me here ..we talked on ..as he was looking at the very feminine flow of the way i draw, on ..-he was looking at my drawing and feeling some frustration in his not being able to capture in all of his paintings and drawing ..a wom. wom'n , that very feminine flow needed to ..in more than the form of the hand drawing ,/ if you have ever looked over on his pgs through ioz/jacob , of all of his wom'n there looking too masculine in the forming of their bodies from his pen and brushing , and i said to him with that .. to look at the way well known painters paintings are as well,that he is not alone in that drawing from yourself ..look at their wom'n .. / i first commented here because of the motion of the dog in ..of the flow of .. .

Here's the story on the dog.

i started to look and read , need to take a break to look at my tvont films here and just sit back (stir stiller ), then i'll get back to ../ what made you put it up as your header ?, and what is the video at the end of that write up on your friend brendan that won't play? , / i had an interesting dance with bob marley's gran daughter the summer before last that i told davidly a bit about at the time.. /,and have something to note about seizures.. , more in a bit ..

what made you put it up as your header ?

There was a caricature of John McCain up there before, and I replaced it with the dog because I'm getting away from overt political cartoons and leaning more towards cartoons about personal stories.

of not overt .. what i am meaning back with my first comment.. on that post of day of birthing .. /, of another old doodle -the glenn that i suggest above at ..in with ...of listening to as i dance literally in here ..is gould ,more in a bit , tub swim time .. .

and if you would like to follow up ..on that last comment that i dropped there look on io z/jacobb's comments today , at his newer flying ..disc blog .. .

added note, i haven't yet said what justin posted on line ,but i will be saying , and in time through my family connect to the globe and mail here .. there as well