Dreams of a Rabbit Fiend

The marketing and sale of comic books is revolutionized when I begin selling comics by the pound (by the kilo for the foreign markets). “I have a potluck at the office on Friday. Give me 3 lbs. of Skunkball, 2 lbs. of Pandesoul, and, what the hell, it’s Jimbo’s birthday, gimmee 5 lbs of Spyrograph Eyes.” I become famous and filthy rich. Other cartoonists quickly follow suit, and the sale of comics by weight becomes standard industry practice. Monsanto starts selling genetically modified comics. The more precious works are soon sold by the ounce. People start reblogging my posts, adding only “Dave” to the reblog.

I wipe pizza sauce from my lips with a paper napkin and photograph it, naming the red color “PanPizzatone”. The tumblr post gathers 13,835 notes. The people at Pantone want to talk to me. I consider photographing some used toilet paper and naming the color “Van Halen’s Brown Sound”, but my wife wisely talks me out of it. I spill coffee on my pants at SPX and announce on Tumblr that I’m running back to my hotel room to change my pants. 347 people “like” the post, and 27 people actually reblog it, adding only “Dave” to the reblog. Good Morning America interviews me, and I declare that banana seats and sissy bars are making a comeback. George Snuffle-uffagus ends the interview speechless, except for a shoulder shrug while he smiles and says “Dave”.

In January of 2016, I go to the Iowa Caucus and same day register as a Republican, because you can do that in Iowa. I bring 425 Twitter followers from my precinct with me who also register as Republicans. We nominate the re-animated corpse of Richard Nixon for the ticket, and KGAN interviews me outside the caucus hall while I’m wearing a John McCain T-Shirt. Mitt Romney’s Hair tweets the interview with the hashtag “Dave”. 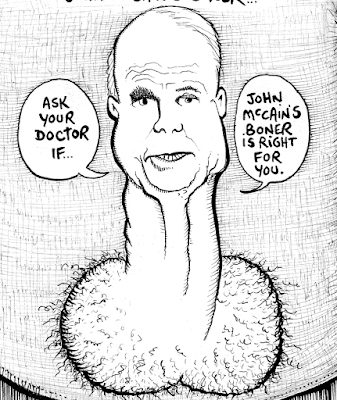 Prince, Cher, Madonna, Sade, Shakira, Beyonce, J.Lo, and Kanye are partying in Prince’s limo in Chicago. Shakira suggests they drive to Dave’s house, and Sade squeals with delight, “He has the most amazing mulberry tree in his back yard.” Kanye gets real excited, “I’ve never met Dave, our paths have never crossed, but I’ve always wanted to meet him. He’s one of my heroes.” After several hours, they arrive at my front door, and I invite them in.

Kanye becomes visibly agitated. He thought that he was being taken to see Dave Chappelle. He starts flying into a fit of rage, toppling furniture, ripping books off shelves. At that moment, Dave Chappelle, taking a break from the script we’re working on for his return to TV, walks in from the backyard with a fistful of mulberries. “What’s going on in here?” Kanye starts sobbing inconsolably. Cher winds up and slaps him across the face and screams “Snap out of it!”, but to no avail, so we take him into the backyard to feed him mulberries. Hummingbirds appear and drink the salty tears from his cheeks.

When he has sufficiently calmed down, J.Lo shoves a torn up copy of Meghan Turbitt’s “#FOODPORN” under Kanye’s nose, and shames him into immediately flying back to New York to get a replacement copy for me. He arranges to meet Meghan at a Dunkin’ Donuts to purchase a copy of her comic. Paparazzi snap pictures of the transaction, and #FOODPORN goes viral, skyrocketing to the top of the New York Times Bestseller list. The movie rights get sold to Dreamworks, and the film, starring Gillian Anderson, grosses a billion dollars. Awash in cash, Meghan buys the world’s busiest Dunkin’ Donuts, the one on the corner of Park Ave. and Route 18 in Weymouth, Massachusetts, a stone’s throw from the original Dunkin’ Donuts in Randolph. She immediately brings back the original Bavarian Cream donut, a donut filled with vanilla whipcream, not to be confused with the Boston Cream, which is filled with vanilla pudding.

While making the rounds of the talk shows to promote the Broadway show “#FOODPORN;The Musical”, Rachel Ray asks Meghan over homemade Bavarian Cream donuts about some of her favorite donut fillings. “Have you been to Dave’s house, Rachel? He makes the most amazing mulberry jam from a tree in his backyard…”

Suddenly, a man bursts through security and fires a 9 mm handgun, emptying the entire clip into my chest. I am dead instantly. He surrenders to police, and offers up his motive. 30 years before, he had purchased from me a black velvet painting of Elvis riding a unicorn, and a copy of my mini comic, “Brave Nude World”. I had been selling artwork out of the back of a 1981 Datsun 210 station wagon in the parking lot of an abandoned Sinclair gas station on the outskirts of Boulder, Colorado. 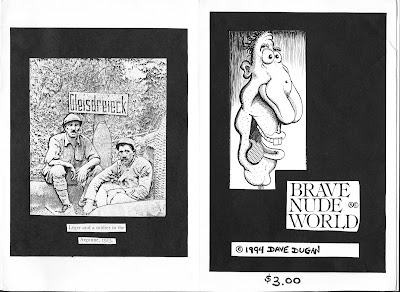 The comic was wrapped in restaurant grade Saran Wrap, and sealed with tape, so the man, Frederick James Porter, was unable to read the contents before purchasing. He was looking for something novel to masturbate to, and a comic book seemed like a good idea. From the cover, he assumed there was all sorts of naked women in it, and I assured him it was full of boobs and asses. By the time he got home and found out it was page after page of penises with politicians heads, a single dialogue balloon spouting from each of their heads like a blob of sperm, with quotes from Moby Dick, I was long gone. He tore the comic to shreds and vowed revenge.

And now, 30 years later, 60 Minutes did a show about how Drawn and Quarterly was planning a 30th anniversary edition of Brave Nude World. There was only one print run of 25 copies in 1994. Copies showed up on eBay periodically, selling for over $5000 for a mint condition copy. The realization that he had torn up $5000 drove Porter over the edge.

A wake was held in the backyard of my old buddy, P.H. Milner. My corpse was placed in the backseat of a 1972 olive green Dodge Dart, and a microphone was set up for people to tell stories. Milner kicked off the festivities. “You all knew him as just “Dave”, but us folks from way back always called him “Doog”. Did you ever hear the story about the time, about the time Doog got falsely arrested for deserting the US Army, and he had a chunk of hash the size of a golf ball in his pocket. It was Thanksgiving weekend, 1985, we were teaching frat boys at Bentley College how to smoke using an old pickle jar and a paperclip…”

Just then, Bill Murray shows up driving a stolen ice cream truck that’s outfitted with 4 kegs of beer. Kanye grabs the microphone from Milner and, with tears in his eyes, tells the story about how I brought him back from the brink of a psychotic break using nothing but a handful of mulberries.

Eventually, the beer runs out, and the Dodge Dart is driven up into Martin’s Woods. A large bonfire is started, and I am thrown onto the the funeral pyre. Using my caricature of Richard Nixon from I Wish I had A Watermelon as a model, GW Duncanson used a 3D printer to make an effigy of Nixon, and he tosses into the flames. Bill Murray claps him on the back and says “Nice touch, GW, Dave would have gotten a big kick out of that.“

Years pass, decades pass. Every digital file of my artwork gets corrupted, every paper copy crumbles to dust, every signed and numbered sheet of Charmin disintegrates. But much like school children are taught that Eli Whitney invented the cotton Gin, and that’s the only thing they ever remember, I’ll be remembered as the guy who set up his table at The Chicago Zine Fest in 2016 like the deli counter at Hy-Vee, a glass case and a postage scale, and revolutionized the comics market by selling comics by the pound.

Throw another cheez log on the fire.
Posted by zencomix at 1:48 PM

Really Awesome Blog Thanks for Sharing.