I went to the Democratic Caucus in precinct 17 of Iowa City, Johnson County at Herbert Hoover Elementary School. Doors were supposed to open at 6:30 p.m.. I got there a few minutes before 6:30, and the doors were already opened. The line to get in was about 100 people long. By the time I got to the front of the line to enter the building, there were about 150 people behind me.I estimate that 400 people entered the building before 6:30.

Because I was registered as an Independent, I had to fill out a form and re-register as a Democrat. The caucus was being held in the gymnasium. The line to get in the gym snaked up and back 2 different hallways. When I got to the front of the line to enter the gym, I was issued my "ballot", and I use that term rather loosely. My "ballot" was a 3x5 index card with the number 517 printed on the back, along with a small round orange sticker. At least I think it was # 517. The "ballot" I ended up with at the end of the night was #419, but more on that later. 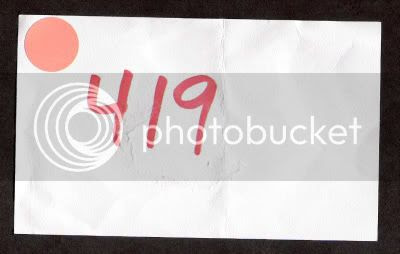 As I entered the gym, it was already very crowded and very hot. Several hundred people were still in the hallways. I got in earlier because the line for new voter registrations/ independents was smaller than the line for folks already Democrats. There was a woman in the middle of the gym, against the back wall, with a microphone that appered to be running the caucus, or chairing the meeting. The different precinct captains for the different campaigns met people at the door and directed people to the area where their respective groups were meeting. I joined the group for Chris Dodd. The Chairwoman with the microphone was difficult to hear. The sound quality was poor and she was competing with hundreds of conversations, but people were making motions, motions were seconded, and voted on by voice vote while hundreds of people were still waiting in the hallways to check in! They were making shit up as they go along instead of having a predetermined set of rules for the proceedings.

Once everybody was checked in and in the gym, the total was 661 voters. Many people brought their children, and the number of people in the gym was well over 700.It was nearly impossible to move around, like riding The Green Line of the MBTA after a Red Sox game. At this point, the caucus broke up into the different camps to get an initial head count.The 15 percent threshold to remain viable was 100 voters. Apparently they rounded up, because 661 x .15= 99.15 . The camps for Dodd, Biden,and Kucinich met in classrooms across the hall from the gym. The Edwards camp met in one of the hallways, and Obama, Clinton, and Richardson remained in the gym.Who determined the positions of the camps, I don't know.

The Dodd camp had 16, Kucinich 18, Richardson 52, and Biden 38.None of them were viable. Clinton had about 115, the Edwards had about 130, and Obama had over 200. I guess it was determined during one of those voice votes earlier that the initial "re-alignment period" would last 1/2 an hour. The Richardson people tried to get all the Dodd, Biden,and Kucinich people to join forces and have at least one more candidate remain viable, but it just wasn't happening. People had their second choices, and they went for them. I went to the Edwards camp, and gave my "ballot" to the Edwards precinct captain.

By the time of the end of the first Re-alignment period, Edwards and Obama had picked up most of the voters from Dodd,Biden ,Kucinich.The Richardson camp, for the most part, was sticking together and still trying to remain viable. Edwards had jumped up to 182, Obama was up to 306, and Clinton was only up to 129. At this point, with hundreds of voters still in the hallways, someone from the Clinton camp made a motion to do a final head count immediately, it was seconded, and the lady with the microphone was calling for the yays and nays.

With almost 50 voters still uncommitted, the Clinton camp apparently wanted to put an end to anymore realigning because they were not picking up any new voters. The Obama and Edwards people were getting all the second choice people. The Edwards people were outraged, and rightly so, because they were not given a chance to return into the gym before they tried this voice vote.A gentleman tried to get an amendment to the motion to allow an additonal 12 minutes, and it was disputed.Someone made a motion to do a head count on the motion to do an immediate head count, instead of a voice vote. All hell was about to break loose. The lady with the microphone ended up "ruling" that an additional 5 minutes would be granted. Then someone(?) tried to claim that you had to count heads, not "ballots" and they wouldn't let people back into the gym without their ballot, so the edwards people (and the Richardson people) had to hand their cards back to the supporters to get into the gym. This made no sense, because the person counting the votes are the precinct captains for each campaign. The Obama person counted the Obama votes, the Clinton person counted the Clinton votes, the Edwards person counted the Edwards votes.

Now, the counting of voters isn't done by secret ballot, so there is room for intimidation and manipulation. There is absolutely no possible way for a recount. You are expected to trust that everyone's campaign counted properly.The Obama person counted the Obama voters, the Clinton person counted Clinton voters, and so on...

After the counting of voters after realignment, Obama had 306, Edwards had 182, and Clinton only had 129, and the woman with the microphone says "They're going to do some math quickly" to determine the allocation of delegates to the county convention. Nobody could tell me exactly what the "formula" was for allocating delegates. I heard different things from different people. Is the percent based on 661 inital voters, or 615 that were committed to a viable candidate at the end of Realignment.?

If you use 615 voters that were committed to a viable candidate by the end of voting, 51 voters gets you a delegate. 306 divided by 51=6 delegates for Obama.182 divided by 51 = 3.56. If you round up, Edwards gets 4 delegates. 129 divided by 51= 2.52 for Clinton. Do you round up here? How exactly is that last delegate decided? The Edwards people were literally calling "bullshit" since they clearly had Clinton beat, but were ending up with the same number of delegates.