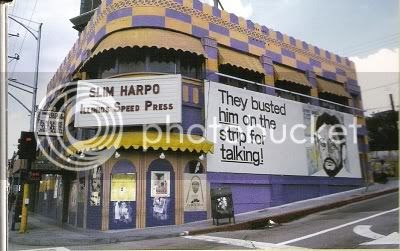 When George Carlin died, after remembering some of his classic bits, my thoughts drifted to Lenny Bruce.

"Lenny Bruce opened the doors for all the folks like me; he prefigured the
free-speech movement and helped push the culture forward into the light of open
and honest expression. I like to find out where the line is drawn and then drag
the audience across the line with me and make them happier for the experince.
Lenny opened all the doors, or kicked them down." George Carlin

While browsing throught the library yesterday I came across a 6 CD set and book on the top shelf, "Lenny Bruce:Let The Buyer Beware". I wasn't looking for it, but there it was just waiting for me, so I checked it out.

Meanwhile, at the recent Netroots Nation, attention was paid to certain bloggers pulling back on "obscenities". BlueGal cuts through the bullshit...

... pulling back on the obscenities? Because as The
New York Fucking Times quotes one (emphasis mine):

Digby Parton, who writes on Hullabaloo.com, said
she initially thought of her blog as an ephemeral form of conversation among
friends and used vulgarities freely. But now she is read by a substantially
wider circle and has cleaned up her language.“I don’t use the same amount of
profanity,” she said. “We’re taken much more seriously as a political force,”
and she has a stronger sense that her words are “out there for
posterity.”

Now I bow to the great writing of Digby as much as any of us do, she's a
godmother to so many and far be it from a nobody like myself to...Posterity?
Fuck that, Digby.What is posterity? The dry spot you wiggle toward after
sleeping with the enemy?

Sheeit.I don't care if you blog the word "fuck" or not. Those kind of
choices are made by writers all the time, and the right choice is what works for
what you're writing.But I do care, very much, where the blogs go and what they
represent. There are two political parties in this country, folks: "inside the
Beltway" and "outside the Beltway." I am a proud outside the beltway
rabblerouser.Chris Mathews? Wolf Blitzer? Markos? To which party do they belong
these days? 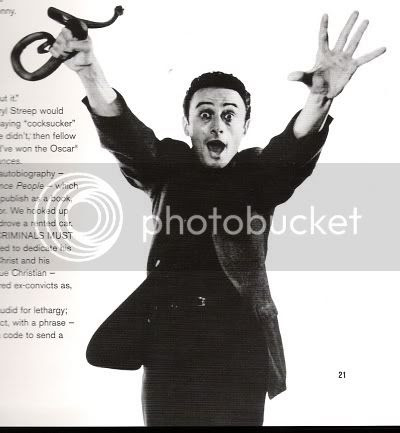 The motivations for arresting Lenny Bruce and threatening club owners with arrest or loss of licenses had as much to do with his satire of organized religions as it did with using the word cocksucker. George Carlin liked to find out where the line was and drag the audience across. He talked about "The Game".

Lenny found out where the line was and didn't just talk about it, but took it to the streets. In 1951, after moving to Miami and working the clubs with his wife Honey, he organized a charter from New York State legalizing The Brother Mathias Foundation, getting licensed to solicit and disperse funds for a leper colony in British Guiana. He'd put on a priest costume with the collar and go door to door asking for donations for the leper colony. He was arrested in Palm Beach on suspicion of gaining money by deception - "soliciting funds for some NONSECTARIAN organization that had sponsored a leper colony." (my emphasis). He was eventually charged with vagrancy and panhandling. He had raised $8000, of which $2500 reached the leper colony. He had the unmitigated audacity to play the Religion, Inc game , and they took great offense! I'm not sure what church dominated Palm Beach, but Lenny was encroaching on their turf, and he paid the price.

Paul Krassner wrote about a gig in Milwaukee in 1960.

That evening, three plainclothes police walked into his dressing room at
the club where he was working. They told him not to discuss politics or religion
or sex, or they'd yank him right off the stage. The previous night a
group of Catholics had signed a complaint about his act.

My first encounter with Lenny Bruce was from a piece in Arcade: The Comics Revue No.2, 1975, written by Paul Krassner and illustrated by Robert Crumb. 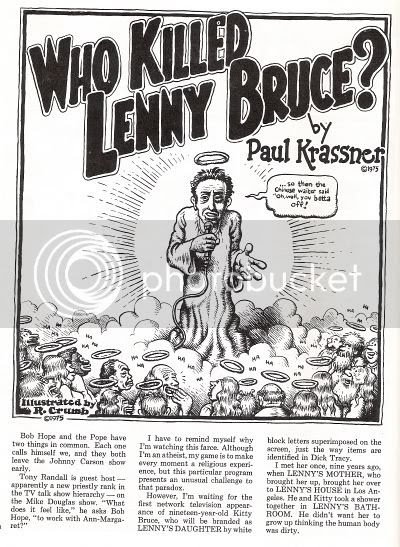 Once in Chicago, a few of us were driving around and stopped the car in front of a Religious Novelties store. Lenny got out and purchased a framed portrait of John XXIII, the first Pope in history to smoke cigarettes.
"I just Know I could make him laugh," Lenny said.

We drove past a Catholic school and stopped again. Lenny beckoned toward a couple of little girls standing around in their parochial uniforms. "Hey c'mere a minute - I got the real thing in here." They approached the car, he opened the door, whipped out the painting of the Pope and flashed it like some kind of religious exhibitionist. Lenny was right; Pope John would've laughed at that, one of those hoarse laughs that people develop from smoking too many cigarettes.

I'll leave off here with a 6 Cozmik Debris of Zappadan Separation, the gig poster for his last shows 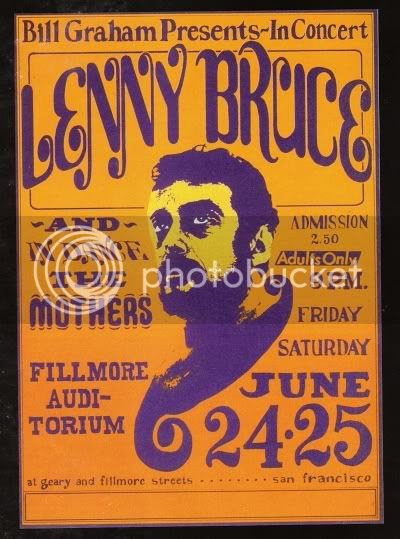 Zen comix is a nice site. First time I am forwarding comment for this. The cartoon of Bush on this site is interesting.