I'm not a fan of award shows on TV. I don't watch the Grammys, The Oscars, The Tonys, The People's Choice, or whatever else is out there. While I may make a note of the winners, as a pop culture item, I don't necessarily consider the awards as valid indicators of quality.

When it comes to internet awards, I'm just as apathetic. That said, it is an honor to be nominated forThe Best Comic Strip by the likes of Jon Swift, The Culture Ghost, and Tas.Thanks fellas!

I didn't make the cut as a finalist, but from what I gather at the site, the slate of finalists is selected by a mysterious "team of volunteers" that helps out the Wizbang guy that runs the awards. "Explaining why many nominated blogs are not finalists is always the trickiest part of The Weblog Awards."

I haven't been to visit Wizbang for maybe a couple of years. I don't know what goes on over there now, but back in the days when Tas ran Loaded Mouth, the Wizbang crew were bunch of Kool-Aid drinkers. So pardon me if I don't get all excited about an internet award run by Wizbang. 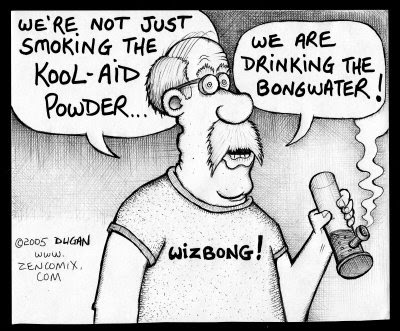