"Frank Zappa was one of the gods of the Czech underground, I thought of him as a friend. Whenever I feel like escaping from the world of the Presidency, I think of him."

In early 1990, Zappa visited Czechoslovakia at the request of President Václav Havel, and was asked to serve as consultant for the government on trade, cultural matters and tourism. Havel was a lifelong fan of Zappa who had great influence in the avant-garde and underground scene in Central Europe in the 1970s and 1980s (a Czech rock group that was imprisoned in 1976 took its name from Zappa's 1968 song "Plastic People"). Zappa enthusiastically agreed and began meeting with corporate officials interested in investing in Czechoslovakia. Within a few weeks, however, the U.S. administration put pressure on the Czech government to withdraw the appointment. Havel made Zappa an unofficial cultural attaché instead.Zappa also planned to develop an international consulting enterprise to facilitate trade between the former Eastern Bloc and Western businesses. On June 24, 1991, Zappa took part at the concert "Adieu Soviet Army", organised in Prague, as the farewell to the last soldiers of Soviet Red Army, leaving free Czechoslovakia (the Red Army had occupied Czechoslovakia since the Prague spring). This was probably Zappa's last rock appearance on the stage and it is recorded on the album Adieu C. A. (Soviet Army). 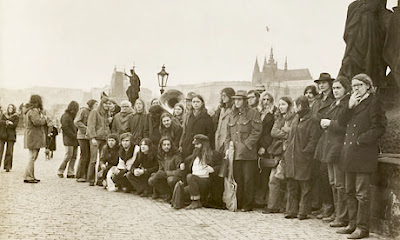 "Banned and jailed under Czech communism, the Plastic People of the Universe helped to bring the regime down in 1989. Inspired by Frank Zappa and the Velvet Underground, and friends with Vaclav Havel, their incredible 40-year history is one in which music and politics are inseparable..."

I did not know that Václav Havel was a fan.
~

I think the Czechs had an asteroid named after him too, if memory serves me.